Blind Sight (Through the Eyes of Leocardo Reyes) Excerpt 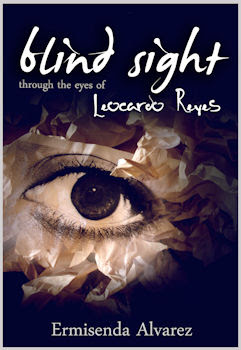 Blind Sight is an urban fantasy about a blind girl who suddenly develops the ability to draw. Told in two different novels, Ermisenda tells the story through the eyes of the blind girl's brother, Leocardo. He thinks Odette is having premonitions. The other volume written by Eliabeth, tells the story through the eyes of Odette's best friend Aniela, who thinks Odette is a medium channeling voiceless spirits.

This is the prologue to Blind Sight Through the Eyes of Leocardo Reyes.

Blind Sight Through the Eyes of Leocardo Reyes


Something was wrong. Leocardo’s blind, sixteen-year-old sister Odette was drawing. She stood next to the fridge and scribbled feverishly on a piece of paper.

“Odette?” he walked over, certain his eyes deceived him. He quickened his pace when she didn’t respond. “Odette what are you doing?”

Something was wrong with her eyes; her pupils were huge, and they engulfed her usual chestnut color.

He tried to pull her arm, but like a cat that didn’t want to be picked up, she seemed to become instantly heavier. The pen continued to run across the page as her silence persisted. He frowned, growing angry.

“Odette!” She did not flinch.

He glanced down at the paper and realized her scribble was actually an image. Trees and mountains framed a large lake on the paper and Leocardo was frozen in confusion. How was she drawing? The pen fell onto the paper as Odette collapsed into Leocardo’s arms.

Twisting her around to face him, he demanded, “What were you doing? Answer me!”

Her limp body shook in his arms; her eyes closed and she was barely audible as if on the brink of passing out. “I don’t feel good,” she murmured weakly. Even though she was naturally petite and fragile, now she looked like she was about to shatter. “I want to sleep.”

The warm brown crept back into her unfocused eyes and her pupils normalized.

“Odette,” he started again, but her trembling became more violent so he stopped. “Okay.” He scooped her up in his arms and carried her to her room. As soon as she hit the sheets, the trembling stopped and almost as quickly, snoring followed.

Leocardo wanted to wake her up so he could question her, but he wasn't sure if she would have any answers. He couldn’t help but wonder if this had happened to her before. He stormed back to the kitchen, picked up the paper, and examined the drawing. The sun’s rays tore through the clouds, and Odette had even added glimmer to the lake’s rippled surface. Odette had been blind since birth; so how could she have drawn this so perfectly? If he hadn’t seen her doing it, he never would have believed it.

Leocardo slouched into the leather couch, still holding the paper. He felt a throbbing pain behind his eyes. Staring at the drawing, he tried to glean some divine understanding of what it meant or how she had done it. His black labrador, Cielo, had abandoned him to sit outside Odette’s bedroom. He was stunned; he knew he shouldn't have been angry with her, but he had been scared and confused.

An hour passed; he was no more enlightened. He looked up to find Odette standing in the open doorway to her room. He kept silent, but his gaze followed her. She seemed better, no longer moving with the mechanical gestures she had used when she was drawing. Cielo’s nails clicked on the hardwood floor as she followed Odette’s every move.

With disbelief, he watched as Odette began to prepare some sandwiches. “Odette,” he called softly, not wanting to startle her.

Leocardo hesitated; why was she acting like nothing happened? “What happened to you before?”

She shrugged, “I guess I had low blood sugar. It was just a headache.”

“What do you remember?” he pried. How could she not remember?

“I had a headache. I went to the fridge. I got dizzy for a second. You caught me.” She paused. “How’d you get from the couch to the fridge that fast?” she asked, as though he was the one who did something strange.

“What?” Irate, he marched over. “Don’t you remember drawing this?” He flapped the page so she could hear it rustle. “What are you trying to pull? This isn’t a game.” He was losing his already short patience. Something could be seriously wrong and she was being evasive.

Her brow pressed together and her lips thinned as she let out a frustrated huff. She spoke slowly, as if concerned he was losing his mind. “Leo…you know I can’t draw, much less see whatever it is you might be holding.”

“I know you can’t,” he said a little defensively. Why was she questioning him when she should be providing answers? “You got up and went to the fridge before you started to draw this. I’m not making this up. I have the drawing right here in my hand!” He restrained himself, shaking the paper again, as if hearing the sound made his story more believable.

Odette’s calm expression indicated that she was not amused.

“How can you not remember?” he asked angrily.

He sighed and dropped the drawing onto the floor. His fingers ran through his hair as he tried to make sense of everything without flying off the handle.

“I’m sorry,” Odette murmured, “but I don’t know what you’re talking about.”

“It’s okay…sorry,” The moment was awkward and disjointed; he was unsure what to do. Odette went back to making the sandwich, and Leocardo returned to the sofa. He snatched the remote and flipped between channels until he settled on the news.

Tragedies flashed on the screen as Leocardo watched, desperate for a distraction. Something wasn’t adding up, cognitive dissonance, ironic that something he was learning in school was relevant to his life for a change. Maybe he imagined it all. Maybe the lack of sleep was getting to him and he had drawn it. Television bored him, but he didn’t know what else to do. The news changed topics, now featuring Alaska and its trading partners.

“Edaion,” Leocardo repeated one of the countries listed. A sudden and overwhelming desire to visit this island nation overtook him.

Odette came over and sat next to him, her unfocused eyes in the direction of the screen. Leocardo leaned forward as if being pulled into the screen. He was mesmerized. Slowly he felt his eyelids droop.

“Edaion,” Odette whispered. A silence fell over them and a supernatural film began to wrap around them. Invisible to all, it pressed down on them. Cocooned in this new state, he continued to stare in a trance at the screen. Unable to understand why, he had never wanted anything in his life as much as he wanted to travel to Edaion.

When he tried to stand, he felt an immense pressure upon his shoulders, face, and chest. He reached out to Odette, feeling as though he was falling through the sofa itself. Cielo whined and nuzzled his knee. His grip around Odette’s hand tightened. Suddenly the pressure snapped and he felt the painful sensation of being rammed from all sides, as if hit by a train.

In a dreamlike state, he stumbled forward with Odette sandwiched between him and Cielo. They were somewhere else, no longer in the cozy Barcelona apartment. The air was clean and chilly. A stranger’s arm brushed up against him as a group huddled together, all looking lost and confused. Half a dozen dogs circled and sniffed them. While trying to restore his equilibrium, he noticed the dogs wouldn’t leave Odette alone. They sniffed and licked her palms causing her to wipe them on his shirt. Someone asked him if he was okay, but he didn't answer. The speaker herded the group onto a bus, and as soon as he was seated, Leocardo’s head fell against the windowsill. Blackness engulfed his vision.

The bus lurched and Leocardo was propelled into the seat in front of him. His eyes flew open; his throat felt dry and his nose was pink from the cold. Someone held a colored version of Odette’s drawing before his eyes. It was blurry, and as he reached out, his fingers hit glass. With his sleeve, he wiped the window to see the drawing become clear. Something was wrong.

Why was it behind glass? Where was he? Why was he on a bus? His gaze darted back to Odette who had Cielo nuzzling her affectionately. Her eyes were closed. He woke her up with a shake of the shoulders.

“What is this?” Leocardo demanded as if she would know.

“What’s what? You’re the one who can see, remember?” Her voice was soft and timid. He realized she was just as confused. He wrapped his arm around her and pulled her close and then placed a soft kiss on her forehead.

His gaze returned to the window. It was still there. As the bus meandered through perilous mountains, he never lost sight of the lake. It was glistening, majestic and overwhelming in size, but it was not a drawing. This time he knew it was real. Something was terribly wrong.

This post is part of the Blind Sight Blog Tour. Blind Sight is an urban fantasy novel written in two volumes, each telling the story through a different character's perspective.