Blind Sight (Through the Eyes of Leocardo Reyes) by Ermisenda Alvarez 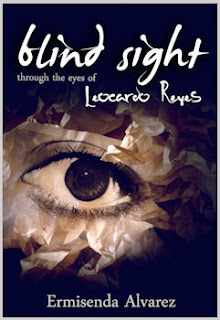 
Title:  Blind Sight (Through the Eyes of Leocardo Reyes)

A blind girl drawing is abnormal even on the magical island of Edaion where leaves brush themselves into piles in the middle of the night. So when Odette Reyes, a girl blind from birth, begins to experience ominous side effects of the island's "gift," her brother Leocardo and best friend Aniela must figure out what the doctors cannot. As an immigrant, Leocardo is not biased by accepted rules of magic and determines that Odette's drawings are premonitions. Aniela grew up with magic and knows premonitions are impossible. She determines Odette is a medium channeling voiceless spirits.

Who is right? Whose eyes will you read through?

Snatched out of their life in Spain, Leocardo and his blind sister Odette find themselves on an island with no recollection of the trip. After foiled attempts to escape, Odette’s strange behavior gets worse. Even after learning the island has bestowed magic upon them both, Leocardo faces the possibility his sister is having a mental break down. Just as he thinks he is settled in, job and romantic life stable, Odette disappears.

Read Aniela's side of the story in "Blind Sight Through the Eyes of Aniela Dawson" by Eliabeth Hawthorne.

I've been reading this book off and on for the past couple of weeks, and sadly, I'm not finished with it yet. It's been off and on only because I was on vacation (at the beach!) and then catching up from work, otherwise I would be done with it by now. I'm going to write a review up to the point I've reached. It's not something I normally do, but since I agreed to be part of this blog tour, I wanted to get a review up ...even though the authors were fantastic about me going on vacation and said I could just post an excerpt. So, on to the review....

The format for this book is different and not something I've seen for a long time. Two books. Both titled the same. Each told from the perspective of a different character. Each written by a different author. I remember reading books as a kid where you would read one side, then flip it over and read the other side. While I haven't had a physical copy in my hands, this concept sort of reminds me of that. I was intrigued and excited about the whole idea! As a writer, I cannot imagine how incredibly difficult writing like this would be. You would have to know your writing partner very well to pull this off.

I let the authors choose which side to give me, and I received Leocardo's side. The other side is from Aniela's (aka Ana) perspective. You get lots of exposure to Ana throughout Leo's side and I can only imagine that the same is true for Ana's side. At this point, I can't speak as to whether or not they are stand alone reads, but why cheat yourself, anyway? It's also interesting that one perspective is from an outsider and the other is from a native.

I found the beginning slightly confusing. The story seemed to jump ahead a bit, without much explanation as to what happened. Some of it comes back later in flashbacks that Leo has. Some of it (so far) has not been explained at all. I understand that it's supposed to be because they don't remember it but it makes it confusing for the reader. If I'm this confused as a reader, how confused would the characters be? And, taking that into consideration, I can't believe how relatively calmly they take everything. Leo does freak out a bit, but not nearly as much as I think I would.

Leo seems to be a well fleshed out character. He is a devoted big brother to Odette and feels an overwhelming responsibility to her. I thought it was rather strange that they lived together at the beginning of the story, rather than Odette living with her parents. Especially considering that she is still in high school and blind. Leo was going to college at the time and I don't know many college guys that would want their blind little sister living with them unless their parents were gone.

I also really like Ana. Even though she is young, she knows who she is and seems to be fairly independent. She will do what she has to do to help Leo and get things done, regardless of the consequences. She is strong, but also vulnerable when it comes to Leo.

Odette, on the other hand, comes across more like a spoiled brat. We don't see a lot of the relationship between Odette and Leo, other than the fact that they live together, but she treats him horribly enough to make me question his devotion to her. Sometimes she seemed sweet and in the blink of an eye I would be wondering if she was bi-polar. I just didn't connect with her at all.

So far, I'm really enjoying this book! I'm about 2/3 of the way through and anxious to see how it ends.  Right now I'm giving it four stars. If that changes when I'm completely finished with it, I will update the review. It's definitely something I would recommend anyone to check out, if only for the fun and unique quality to it. Once they start reading, I'm sure they'll be hooked.

This post is part of the Blind Sight Blog Tour. Blind Sight is an urban fantasy novel written in two volumes, each telling the story through a different character's perspective.